Launched in Malaysia: Phraya Rum - the "Premium Rum of Asia"

The Rum Bar Kuala Lumpur recently hosted the official launch of Phraya Rum into Malaysia. Yes, “Phraya” is the same name as the major river that flows through the Kingdom of Thailand. Phraya is also a titular meaning for 'high ranking' and thus the name for the product of this proud nation. 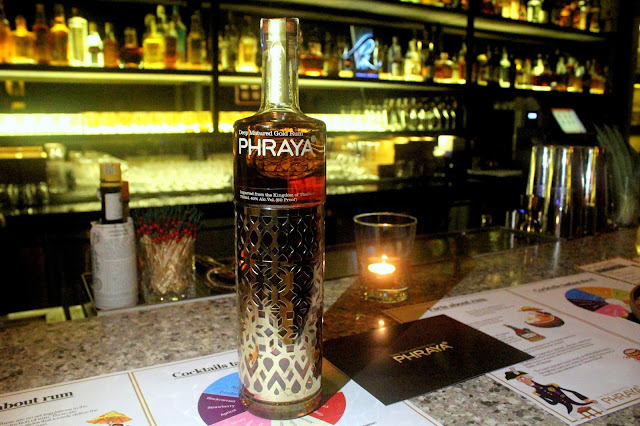 This rum is distilled, matured, blended and bottled in Thailand. It's matured in charred oak barrels between 7 and 12 years, hence they call themselves a “Deep Matured Gold Rum.” Its distinctive gold metallic filigree cuff wrapped around the bottle lends it a lux look, to capture the brand's claim of it being "Asia's premium rum".

Phraya plays up its Eastern heritage and philosophy in its marketing, governed by the four natural elements, Fire, Earth, Air and Water. The Fire comes in the form of the charred oak barrels the rum is aged in. The Earth is responsible for the quality of the sugar cane, grown in Thailand’s Nakhon Pathom. The Air is the tropical climate of the region, and the aging warehouses are buildings set on stilts over cool lagoons to moderate the hot weather. The water is, well, water, naturally occurring near where Phraya is distilled.

The brand has in its merit won a Double Gold medal at the prestigious 2013 San Francisco World Spirits Competition, earning 95 points and the description “ultimate recommendation.”

It's good story, and at the end of the day, it's also a pretty damn decent rum. At 40% ABV, it's got quite a nice mouthfeel, not overly sweet, and strongly reminds us of coconut candy. Mmmm..

Distributed by the folks at Single & Available and retailing for about RM238 a bottle, you'll also be able to find this in selected bars and F&B outlets like the Rum Bar, Jungle Bird, Mish Mash, Coley and Ekkamai.