What makes a whiskey and a whisky different (apart from the obvious missing vowel, wise guys, haha) is that "whisky" comes from Scotland, and is also known as a Scotch. What makes a Scotch a Scotch is, among other things, that the whisky needs to be aged in Scotland, aged for at least 3 years and bottled at no less than 40% ABV.

Jameson's very proudly, made in Ireland. So it's not a Scotch, neither it is a whisky. It's a whisKEY.

Doesn't make it worse or better. It only makes it different from a Scotch.

It is tripled distilled, which is probably why the aroma isn't as strong as  say,  a single malt whisky (SMW) which is distilled only twice. But it is also the reason why it goes down so smooth, it claims. Though it IS smooth.

Oh and it is sweet. You can smell the sweetness (which is unlike the strong vanilla sweetness from SMWs) and taste it too, even on the rocks. Has that slightly smoky aftertaste which is not distracting.

Man, I need to take better pictures of the stuff I drink or throw away that BB for a better phone. :/

Email ThisBlogThis!Share to TwitterShare to FacebookShare to Pinterest
Labels: whiskey

Asahi on a Hot Tuesday Afternoon

Just to re-affirm you that this blog is not managed by a bot, I'm slipping in a picture of me. Ohai! 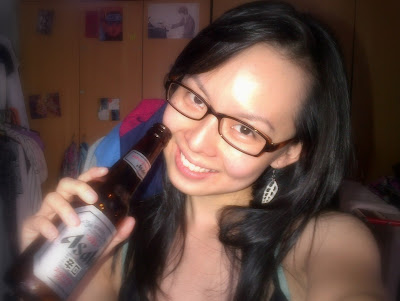 Nothing beats an ice cold beer on a sweltering day, don't you think?

The handsome devil pictured above is Asahi Super Dry, a favourite lager of mine.

Here's a description of what the beer is from Carlsberg Malaysia's website:


Asahi Super Dry was introduced in Japan on March 17, 1987 as the world's first KARAKUCHI beer, and Japan's first dry beer. Ever since then, it has continued to improve the taste and excitement of beer.

Asahi Super Dry is a premium lager beer and is also Japan's No. 1 beer. It's unique clean, crisp & refreshing "Dry Beer" taste (Karakuchi, in Japanese) has caught on with the rest of the world, with its presence in over 80 countries.

And they weren't kidding about the crispy aftertaste. Light, bubbly, clean, dry, and there's none of that usual bitter, hoppy aftertaste that most beers have... so it goes down super easy!

It's a little more expensive than your usual Carlsberg green label or Tiger but is in par with the other "imported" beers.

In a nutshell, it's easy to drink, easy to get, and relatively inexpensive. No reason to not enjoy it at anytime of the day aye? :)

Email ThisBlogThis!Share to TwitterShare to FacebookShare to Pinterest
Labels: Beer


These friendly, colourful weapons of mass destruction are super easy to make!

It's not (yet) the nicest tasting mixtures, but it's palatable. Most importantly, it is also unassuming and lethal - the best combination ever. I've had friends who after consuming 2, declared that they were quite high, muahaha.