A new beginning: The Port Charlotte 10 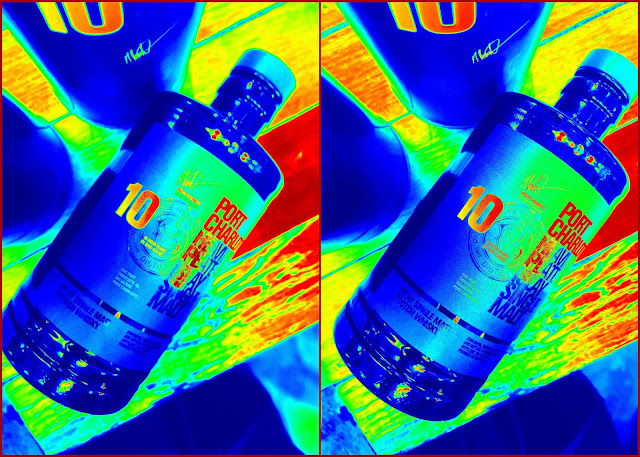 Before Bruichladdich Distillery created the world’s most heavily peated single malt (the Ocotomore), or Islay’s first dry gin (the Botanist), resurrected growing malting barley locally, or dabbled in quadruple distillation, they distilled Port Charlotte Heavily Peated Islay Single Malt. The very first in a long line of experiments, this ‘peat with elegance and finesse’ offered an alternative to the medicinal malts for which Islay is famous.

The PC10 packs quite a punch bottled at 50% abv. Weighing in at a phenol level of 40ppm (the Octomore range weigh in upwards of 133-165 ppm,fyi). While the bite of the peat is rather subtle on the nose, lots of fruits come through on the nose. It is cask strength and thus sip with caution. The strength of the whisky dulls down the peat in the mouth. 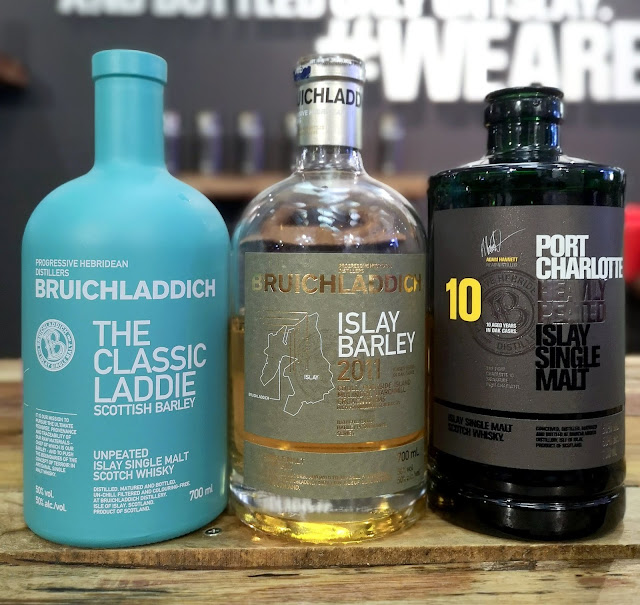 A few drops of water opens up more flavours. One of the reasons why this product imparts so many flavours comes from the variety casks it has matured in, predominantly 2 types of American whiskey casks and French wine casks.

But wait. It cannot be called a range with only 2 expressions. There are another 2 expressions introduced that night. The Port Charlotte MC: 01 2009 and MRC:01 2010.

The MC:01 and MRC:01 expression are codes. MC is in reference of a cask used called Marsala cask that makes Italian marsala wine. A similar version would be port.The MRC:01 code means this expression has been mellowing in a special curated cask previously filled with a certain French red wine. If you are a wine connoisseur , you'd recognise that wine to be one of superbly high acclaim value, the ones only crazy rich Asians will buy.....

No frills, no legends, no fluff, just Tomatin 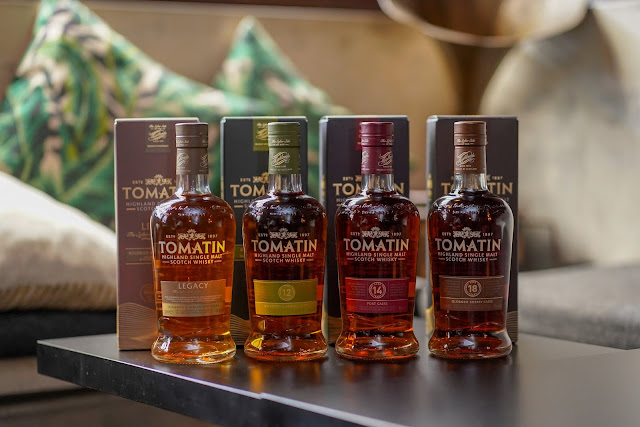 Behind every great whisky brand, there is bound to have an awesome legacy of that product. As the title suggests, the Tomatin is a whisky made from the heart of the community of this distillery.

The Tomatin distillery sits high on the Scottish Highlands at 315m above sea level. Being one of the oldest distilleries since 1897, this proud distillery is acclaimed with several awards. Tomatin means "Hill of the Juniper bush" in Gaelic, yes, the same product that produces the berries for gin distillation.


As this distillery is located far from the coast and in a remote area, the Tomatin distillery is very much community driven where 80% of its workers live on site and with families working there spanning a few generations.

I found all four expressions interesting but the 18 was exceptional,  mostly because I'm quite a fan of whisky aged in rich oloroso sherry casks.

In our shores, the Tomatin range and brand is distributed by Drinks Connexion, importers of many other fine spirits and liqueurs.

Email ThisBlogThis!Share to TwitterShare to FacebookShare to Pinterest
Labels: whisky

Gaelic pronunciations are hard - it's nothing like how they are spelled. I mean, have you ever heard of Ah Knock whisky? AnCnoc is pronounced A-nock and even the packaging is labeled ‘pronounced a-nock’.


We had the pleasure of having Stuart Harvey, the anCnoc distillery master blender to explain his creations and the whisky itself.

AnCnoc whisky is the product of the Knockdhu Distillery, in Knock Hill nestled in the northeast of Scotland in the Highlands with a spring which the whisky is made from.

Stuart said that what makes anCnoc special comes from the original style copper pot stills and worm tubs which cools the spirit vapour differently from the copper pot stills. This contributes to their new make spirit being more savoury, heavier, more fruity.

We had the privilege to sample 3 expressions the 12 (40% abv), 18 (46% abv) and the Peatheart (46% abv) - they are all very agreeable. The 12 and 18 - floral and fruity, and the Peatheart is, you can guess it, their peated expression. AnCnoc uses both American and Spanish oak barrels for the aging process.

Check out what Michael's interview with Stuart and his take on Ancnoc's flavour profiles here.

There are of course other expressions from AnCnoc. Watch out for it on travel retail or you can find these at the sole distributor's shop - Single & Available Whisky.