Lower East Side Whisky was first introduced to Malaysia during the not so recent Whisky Plus held earlier in July... but the brand was just officially launched at the breathtakingly scenic view of Cielo Kuala Lumpur down at Changkat Bukit Bintang earlier this month. Cielo, if you are not familiar with the establishment, is part of the Werner Group’s latest foray brand under their portfolio of impressive outlets in Changkat Bukit Bintang stretch that includes The Rum Bar, The Whisky Bar, Opium, El Cerdo...


We found out that Lower East Side Whisky apart from its name, the whisky has nothing to do with the New York reference. Tony Roberts, from the brand new Borders Distillery that owns this whisky, explains that the distillery is located at the ‘lower east side’ of the Scottish border to England about an hours drive to the border. The map on the whisky bottle is the Scotland map but the map grid pattern on the map is the map of New York. Scottish humour, he says (we didn't get it, haha). 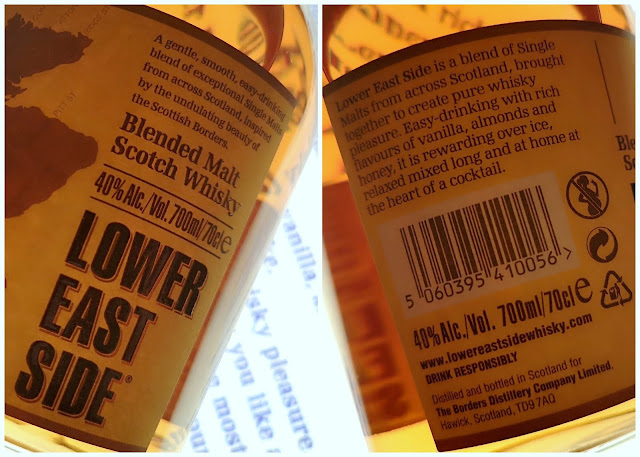 Lower East Side Whisky is not a product distilled from its own distillery. Well, not yet, anyway. Barely 1 year in (officially opened early this year), it can't make the whisky yet and still call it scotch (needs to be at least 3 years old). What they have done is source the 6 single malts ( 2 highlands + 4 speysides) from friendly whisky distilleries and marry them instead.

It has light fruits and orange on the nose and twang of orange peel marmalade on the palate. Its a young blend without much of a finish bottled at 40% ABV. Expect to be retailed at around where the other cheeky blended malt whisky brand is priced as well.

The Borders Distillery (because it is near the border la) is already in production with a blended NAS and Gin.

Good Luck Mr Roberts and we will wait patiently to ‘Slainte Math’ with your other products soon!