When a representative from Diageo teased us by saying that the Mortlach was coming to Malaysia soon, the few local whisky geeks I knew squealed like little girls. Surely that had to mean something awesome. 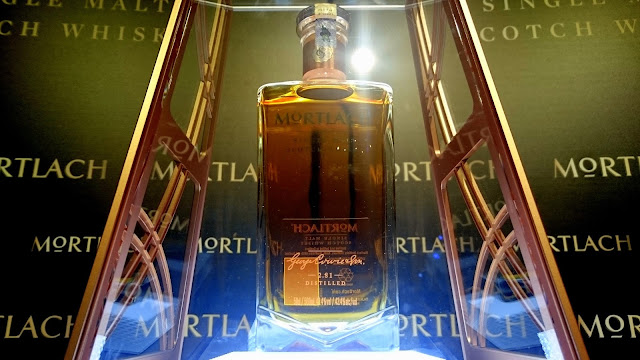 But Mortlach is a brand which is alien to me. So I undertook an "extensive" research to learn about the brand and to fully appreciate its history. Here are some  highlights I've found, which may give you a sense of its history:
So in short, it's a very old brand with a strong cult following over its limited bottling releases...  Then along came Diageo who bought it over and pushed it into the limelight.

(Ms) Georgie Bell, the brand ambassador for Mortlach, who was at the launch event, mentioned in passing that the distillery prides itself over something called the 2.81 distillation process. Evidently it's so geeky that it's hard to put it into writing without boring you. Fortunately, there is this site which might help.


What I do understand, however, is that the special 2.81 distillation process is what gives Mortlach its signature character. To illustrate it, a few of us got to sample their new make spirit (the alcohol that directly comes out from the stills and before it gets barreled) which was very fruity & fragrant (perfume-y even) on the nose, with an intense, flavour in the mouth.


We got to try the Rare Old (sherry + bourbon, my preference of the lot), 18 (sherry + oak) and 25 (oak) years old at the Glasshouse @Seputeh launch party. All of them were inoffensive and easy drinking with different combinations of vanilla, fruits (typical of a Speyside) and spices.

What caught me off guard was the pricing.

Now, true whisky aficionados will never let the trivial issue of price get in the way of their opinion of their liquid gold,  but have a look at these estimated pricing for the local market and draw your own conclusions (provided by trusted sources):
All bottles are 500ml, by the way (700 or 750ml is the standard whisky bottle size).

I personally thought that it was steep. Is this just forex issue with the RM being weak and all? No it isn't. It's an international price strategy. You don't have to take my word on it though, just google it up or refer to the pricing at Master of Malt for the Rare Old, 18 and 25.

I've been officially informed that it's priced like this because it's :
1. an ultra premium brand
2. produced at very low levels yearly; less than 3 million litres a year.

So, with all that, how can you get your hands on a bit of history? Well, the Mortlach Rare Old, 18 and 25 years old whiskies will be available at all authorised distributors, 5-star hotels as well as selected cocktail & whisky bars.

There's something called Special Strength at 49% ABV which should be available at travel retail soon (we didn't get to try). So do give me a holler if you have a bottle to taste! :)