Spurred on by the success of their first outlet at Kota Damansara, Gyukingu has ventured on to open their second one - at the super happening hub of Sri Hartamas.

Gyukingu specialises in Japanese BBQ or yakiniku. While not an uncommon concept locally, what sets them apart from the noise is their focus on premium cuts of meat.

I've been to the Kota Damansara outlet before and was quite wow-ed by it. I have Japan-crazy friends (who makes annual/bi-annual trips to Japan) who claim that this is one of the better yakikinus available in Malaysia and the price while steep, is fair for its quality. All I know is this - it made an impression and I knew another trip was due some day soon.

So it was a very nice surprise when a bunch of us were kindly invited by the team from Cleansui (who are Gyukingu's official water filter system providers) to commemorate the opening of new outlet with a yakiniku wine pairing event. YIPPEE! 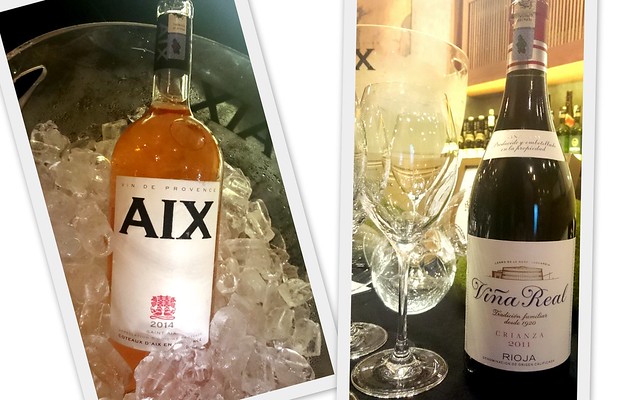 It never occurred to me that wines could be paired so well with Japanese food, specifically yakiniku! I guess I should've known better, since sake is basically a type of wine anyway, heh.

We started off with a French wine, AIX Rose 2014 (RM174.00) and I instantly fell in love with it. I typically don't enjoy rose as they are generally a tad too sickly sweet for me but this was just right. Vibrant, fruity, crispy, and soft.

The heavier meats were paired with a Spanish red - Vina Real Crianza 2011 (RM 200.00). On the nose, it was woody dark berries. In the mouth, silky without much tannin on dryness (yeay!). Then again, we had this wine only after several courses of the lighter meats and the rose, so my tongue was very seasoned by then. This was a great follow up wine, because the bold flavours still came through intensely.

Both wines were so easy to drink and went so well with the food that I couldn't stop asking for refills. In fact, because I was the only blogger who enjoyed drinking so much (the rest were prominent food bloggers), I probably had everyone's share of refills :p


The rose was pair with 4 of their selected premium meats:


The red was paired with the following:
Both meats were recommended to be eaten Korean BBQ style - dipped in miso sauce and wrapped with lettuce - which filled me up to the brim!

As if all these meats didn't already tasted good on its own, my mind was blown when they were paired with the wines. Both meat and wine flavours became more intense, an example of a pairing done right. With every sip of the wine while the meat was in my mouth, I couldn't help myself but squeal in delight. This happened with nearly every single bite. I must've annoyed everyone around me quite a bit, sorry!

We had 2 other sides that night too:
Gyukingu also has an extensive liquour list which includes wines, beers, sakes and shochu.

Good news for you: In conjunction with the opening of the new outlet, you'll get a free scoop of ice cream & 10% off when you mention "Angeltini". Valid at both outlets until 31 Jan 2016.

Both wines are distributed by The Straits Wine Company - the same guys behind the annual Wine Fiesta (the one held at Publika earlier in Oct this year). For more: https://www.straitswine.com.my/

Thank you so much for having us! This has to be one of the more unforgettable dinners we've had.