Short of uprooting it from Dufftown, Glenfiddich replicated its distillery in Carcosa Seri Negara for 4 days from 27- 30 May 2015 to share the experience of an average working day there.  If you've never been to an actual distillery, this tour was a good representation. Also, it's probably THE biggest event of its kind in South East Asia!

Everyone was there. The who's who, the who who wants to be who, the has-beens, the wannabes, and of course people who were genuinely interested to see what a distillery could look like, because they actually took the trouble to purchase tickets.

Well, as some of you may already know, I was there for all 4 days - not as a guest, but as a "whisky guide". Did you bump into me there?

So since I practically know the script by heart and have recited it at least 15 times a day for 4 days in a row, allow me to share the shortened virtual tour experience (in the comforts of your own home) with you. This could be a consolation for those who wanted to go but missed it (WHY WHY WHY!).

Geek mode on? Comfortable? A dram of your favourite Glenfiddich in hand? Ready? Let's go!


This is the door that greets you at the start of the tour.

Oh, did you know that Valley of the Deer is what Glenfiddich actually means in Gaelic?

It's also one of the very few distilleries in Scotland that's still owned by the family that founded it.


Once inside, you'll be enveloped in a black tunnel. The walls (which are covered with flat-screen TVs) impart the history of Glenfiddich to you. Each period will unfold and a large booming voice explains what's going on.

Unfortunately I did not capture a video - but if you're really interested to know, why not check out Glenfiddich.com/family-story/ instead.


Welcome to Whisky 101. You'd get a brief introduction into the world of whiskies with a really awesome gesture-controlled presentation that makes you kinda feel like you're part of Minority Report..... or a giant Wii game.

At the end of the show,  the presenter would knock against the white wall and a door opens up to reveal to you....


... the Malting Process. Well, not actually the process, but a guide will explain to you how the Malting process is done, with the help of some visuals.

Malting is simply the process of increasing the sugar levels in the barley, so that it can be extracted to make whisky. In Scotland, one of the laws for producing Single Malt whisky is that is MUST be made with malted barley ONLY.

There's even actual raw barley in the corner with a shovel for chronic selfie/wefie takers who can't help themselves.


Welcome to the mashing process - this is a replica of a mash tun. It's a big tub where sugar from the malted barley is extracted.

How is it done? Well, without getting too technical (and as aptly described by one of the Brand Ambassador) - imagine the malted barley is sugar which you've just added into your cup of hot kopi. That cup is your mash tun. If you keep stirring the kopi, the sugars will dissolve, right?

Next come the the Fermentation process - where alcohol is created.

Yeast is added into the sugary water extracted earlier. Yeast is a living organism which feeds on sugar and oxygen to produce carbon dioxide and alcohol.

Fun fact: Until this step, this is how BEER is made. So you can kind of very crudely say that whisky is actually distilled beer.

Another one: fermentation is usually done for 2-2.5 days, but in Glenfiddich,  it's done for at least 3 -  which is where the pear notes (the house profile) come from.
The alcohol from the fermentation process gets distilled here.

Fermentation can only get you so much alcohol (about 8% ABV),  while scotch whiskies need a minimum of 40% ABV, which is why distilling is required. Distilling can increase the alcohol up to 80%.


This section is supposed to showcase what a spirit safe is. It's where the stillman chooses the best part of the spirit from the distillation process that goes into the barrels for maturing.


.... the Cooperage, which is where barrels are taken care of. Easily the highlight of the tour, Glenfiddich actually flew in their Head Cooper, Ian Macdonald, to show how barrels are put together.

This guy is a champion.  The hammer that he wields is not light to begin with (at least 2 kg) but he carries them about like it weighs nothing. He's been doing it since he was 15 and has been doing it for over 45 years. He can actually assemble a cask in about  7 minutes.

Ian had to put together and dismantle the same barrel for as many times as there were tour groups for all 4 days. Yet, he always has this smile on his face, while cheerfully repeating his story over and over again (in his very heavy Scottish accent, no less) like it's the first time he's telling it. What a trooper!

Fun fact: Glenfiddich prides itself to be 1 in a handful of distilleries in Scotland that actually owns its own cooperage.

After the cooperage highlight, you'll be led to a short tunnel where rows of barrels are placed, replicating the warehouse for more selfie/wefie sessions, while you head towards the second highlight of the tour:


A tasting bar.  Here, your flavour preference will be matched to a dram of Glenfiddich of the same profile:
While you are tasting the whisky, you'd get to play with really neat interactive tables that tells you about the dram you're drinking, and more about Glenfiddich.

This was also the only place where the 21 is served. Some jokers actually snuck back in here to get refills - naughty naughty!

After the whole tour, you'll be directed back to the bar to enjoy drams of 12/15/18 year old Glenfiddich, because how else to end a distillery tour? 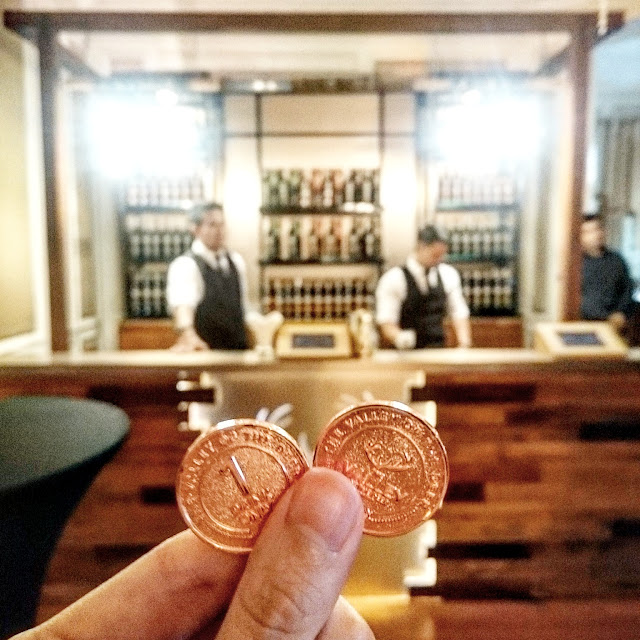 Glenfiddich made these cute custom-made metal tokens which were redeemable for drinks. I'm pretty sure some people actually liked it so much, they forgo-ed a drink just to keep a token as souvenir. :)

Did you make it for the event? Apart from the crowd control (it was wildly popular!) and the horrible rain (feels like in Scotland!) did you have a good experience? I know I  did - and this time especially so as I was actually PART of the event! :)