Man, after last week, I thought I would go easy on the drinking and whiskies but apparently, I'm made of tougher (and more idiotic lol) stuff. This week's summary is a little late because I just came back from spending the weekend in Melaka for a friend's wedding which was also a great excuse to stuff my face with food along the way (sorry about all that food spam on my insta today lol).

I love Chinese banquet weddings. Bonus if the first four (out of 8, usually) dishes tastes really good (usually the appetiser, soup, white meat & fish) because I'm usually too stuffed to have anymore (after that it's commonly the prawns, vegetables, rice and dessert). Even bigger bonus if there's loads of booze about - this one had a whole lot of beer, wine and whiskies. Back in the day (I'd say about 10-15 years) ago - chinese banquet dinners predominantly featured brandy and at the most, blended scotch. These days? Single malt and Japanese whiskies are all the rage. Attending a chinese wedding dinner is really a good gauge of what the current beverage trend is. :) 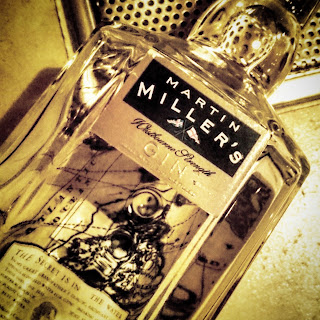 Had this at O&A last week. Hmm, seems like I'm really into my gins now. :D This one tastes like it's in between your london dry & botanicals. Stuff like this reminds me why I love the beverage industry so much. You think you've tried a lot and then something new comes along to surprise you. I wish I could easily get one of these but unfortunately, it's not easy to get, and also in the premium category like your Botanist (which is already RM2XX duty free, by the way). I think I will invest in more gins, while the whole region is still mad with their whisky. Rums too. Once, the whisky craze dies down, it's likely we'll take to rum or gin. Let's see. :) 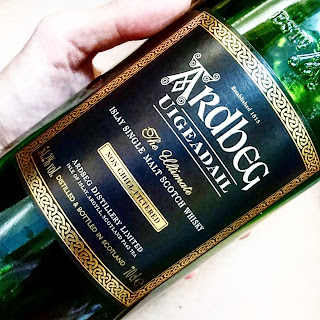 Sampled a good friend's stash to revisit the taste. Last I had it (at the bee's whisky festival) I remembered liking it very much. But then again, I realised that it's probably because my palate was so seasoned by >20 types of whiskies I've tried that day that Uigeadail's strong punch was easier to palate and really stood out. You see, for someone who likes her soft, fruity, stuff, I tend to thread slowly around Islays in general. So the verdict? I can't have it as my first whisky because of the peat. It goes down better for me with really heavy dinner and probably a good dram to end the night with after several others. I really wouldn't mind keeping one in my cabinet for days when I really need a punchier flavour to wake my tastes buds up. 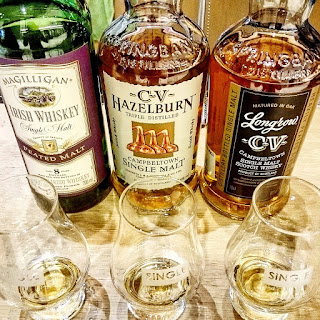 So Single & Available (S&A) had a bunch of new stuff to try last Wednesday in conjunction with Father's Day - yes just in case you missed my previous (many) mentions about it, S&A hold whisky tasting sessions every 1st Wednesday of the month at RM20 nett for a flight of 3. I always try to make it because it's really the best session to try stuff you don't have for a ridiculously cheap price. And there's always something new every month. This week features a little peat in everything.

Magilligan Irish Whiskey, 8 years old matured in bourbon cask, 40% ABV - Oh man I LOVE THIS. The first time I had it was in Mishmash in Penang and I remembered liking it tonnes. Sweet & fruity upfront, short finish with a light peat in the end. I could drink this ALL NIGHT. I think I NEED to keep a bottle of this at home.

Hazelburn CV, 46% ABV, mix of 6-10 years matured in bourbon cask  - My second favourite of the night. More complex,  thicker, smooth, syrupy mouthfeel than the 1st. And that nose, mmm vanilla! I read that it's unpeated, but there's still a faint peat at the end for me.

Longrow CV, 46% ABV - Made of whiskies between 6-14 years old. Peatiest of the 3 and the driest (matured in sherry, among other casks).  Read many reviews that it is awesome, but you know how I'm not really into sherry and peat in general. :)

CV is actually what it means - curriculum vitae. It's the expression that showcases a range of differently aged whiskies. Supposedly to be discontinued, so you might need to have them if you're into collecting. 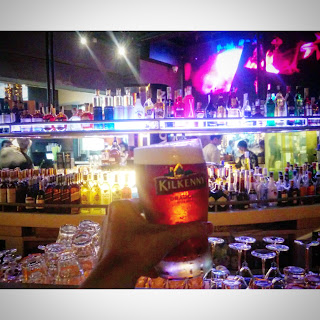 Dropped by for a quick Kilkenney before heading for an event in the same building. WIP has been around ever since I can remember. It was and STILL is one of those places that's never empty. During the work week, it's THE place for yuppies from the surrounding corporate offices to eat and imbibe. On weekends you'll see all the Bangsar elites and expats having their meals and happy hours here.

They have an extensive food and drinks menu, and at the later part of the night it gets a little clubbish - the music's pumped up, the lighting gets a little mad, the bottles come out. This is also, what is likely to be,  the fastest-moving mojito joint in KL. Just in case you didn't already know, it's part of the Soul Society group which also owns Souled Out and Tujo. If you're familiar with those places, then you'll know that the food, atmosphere and service are of a certain standard. 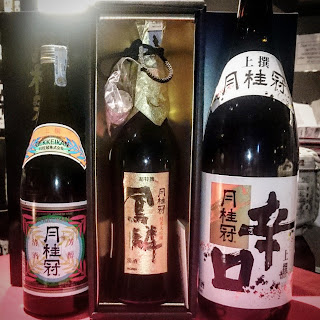 Bar Ippudo @ BSC has brought in new sake! Founded in 1637 in Kyoto, Gekkeikan is one of the world's oldest companies around, and also one of the oldest family-operated too.

Traditional/Original version (720ml, RM168) paired with their deep fried squid: Softest of the 3, to be paired with cold desserts or grilled meat.

Gekkeikan Josen Karakuchi (1.8L, RM228) paired with crispy sushi pinchos: you actually feel the dryness of this, which is what this sake features. Great with mains be it fried, grilled or steamed.

I keep saying this everytime I have sake, but I don't have enough words to describe how awesome sake was MADE to go with Japanese food! Oh by the way, Ippudo is running an introductory promotion whereby the 2nd bottle is 50% off. :) 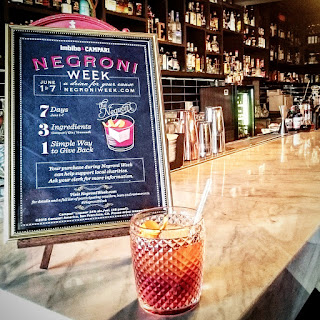 Campari and Imbibe Magazine got together to create Negroni Week in 2013. From 1 -7 June, what happens is that for every Negroni cocktail ordered, participating bars would then contribute USD1 to a charitable cause of their choice. Hyde, being the only bar in Malaysia took up that cause, even came up with 4 variants of negroni in conjunction with it. What a good sport!

I don't really know how to enjoy negronis in general because Campari's really too bitter for me. but this Neighbourhood Negroni I had at Hyde (Saffron infused Tanqueray 10, Campari, Carpano Antica Formula, Fee Brothers Orange Bitters) was not bad at all. It's definitely strong stuff (all spirits!) and not for the weak-hearted. :) Do you like negronis? How do you like them? 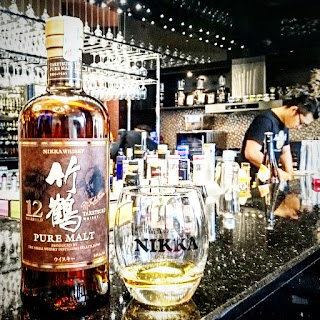 I had this at Hexa Lounge last week. I've been told that the Taketsuru 12 will no longer be made available which was why the NAS came along. ARGH NO. I love this! I love it WAY more than the 21 actually. It's sweet, fruity, smooth, so easy to drink on the rocks. Weirdly, I thought it has more character and flavour was more robust than the 21. Unfortunately it's being kept to go into the older whiskies which makes me VERY UNHAPPY. ;'( If you see this, please get it for me!


Insta Weekly is a weekly summary of boozy updates from my Instagram.com/fireangel80  account under the hastag #angeltini. Feel free to follow me if you think you might enjoy daily updates on booze, food and other random stuff by a girl from Malaysia. Cheers!