Kampachi  celebrated Izumibashi brewery's first visit to Malaysia with a dinner series that took place in Troika last 16 June &  in their outlet at Equatorial Penang on 17 June.

We were also graced by the presence of 6th generation brewery founder/owner, Yuichi Hashiba & sake sommelier, Shigeyuki Masaki, who imparted some nuggets of knowledge about the brand and sake. Who knew that there was such a thing as a sommelier for sake? And how do I apply? :)

Well, the least I can do after we have feasted and imbibed like nobles, is to share with you what we learnt that night. So here goes:

Where is Izumibashi from?
Founded in 1857, it's located at Ebina Plains, an area considered best for producing rice in Kanagawa, near Tokyo.


So what makes Izumibashi so special?
1) They cultivate their OWN rice for their sake - uncommon among sake breweries these days (Yuichi-san quipped that he was a CERTIFIED paddy farmer, hehe).
2) They support organic farming and commit themselves to using very minimal pesticides and chemicals. Their dragonfly logo is an illustration of that commitment. How is a dragonfly related to anything? Well, dragonflies are apparently an indicator of the quality of the environment around it and are known to only hang out at ecologically-healthy rice fields.
3) They pride themselves of making traditional sakes where only 3 ingredients go into their sake - rice, koji (a type of fungus) and water.

What does Izumibashi mean?
The word Izumibashi is a combination of:
1) The Izumi river that used to flow through the area, which also means Spring.
2) Hashi-ba, which is the founder’s family name, and can also mean bridge.

1) Tonbo Sparkling
Tonbo is Japanese for dragonfly, and so, the label design follows suit. The label has 4 colour variations but the stuff in the bottle are the same. The various colours just takes after how dragonflies are found in many colours too.

I must add - this is now my favourite sparkling sake. Not too sweet, not to gassy and with a rich, wholesome mouthfeel.

The first 2 courses went perfectly with the Tonbo, as appetizers should. All flavours were intensified when both the solids and liquid met. While everything tasted delicious what was truly unforgettable for me was that innocent-looking sliced tomato. It was so sweet and juicy, it felt more like a berry than a slimy, squishy tomato. This is coming from someone who hates eating tomato!

Megumi means "blessings". It can also mean "round". So, the sake was named as such because it incorporates the blessings of the sun (it's round, you see), which is important for growing rice. How clever these Japanese are!

This sake was served to us chilled and hot - which tasted just as good, if not better, than its chilled counterpart. I've always been told that only the unlearned drink sake hot (and is only done if you're in the middle of a frigid winter). But,  #TIL that good high quality sakes CAN be drank hot. It changes the smell and taste completely - reminding me of something akin to creamy malt, which came as a complete surprise to me because hot sakes usually smell like turpentine.

These 3 dishes were made to pair with the Megumi:

The soup was a clear, light-tasting broth with soft-boned eel also had these alien , jelly, slimy-like substance which surrounded a sort of a plant.... that reminded me of cooked hasma. This served as a palate cleanser, leading to the ridiculously fresh sashimi which was accompanied by Kampachi's very fragrant home-made soya sauce. And oh my goodness that cod just felt like butter melting in my mouth. Just when I thought it couldn't get any better, all these soft subtle flavours tasted even more spectacular washed down with the sweet Megumi.

I was also asked to try just the soya sauce and sake together - mind blown. Again, #TIL that good quality sake and soya sauce pair well together.


3) Yamahai Junmai Shinriki (last bottle on right, pink label)
This expression adopts the "Yamahai" style of making sake which is the most tedious, labour extensive of all to make, and therefore, rare to find. But this method produces more "umami" flavours from the sake.

Shinriki literally translates to the "power of god". If you've got such a name printed on your label, you win liao la!

The Shinriki went with these:
Prawns were fresh, springy and crispy, which we dipped into the special green tea salt. The wheat gluten was chewy like muar chee with tofu skin -  pretty interesting!

I broke up the rice ball to mix it with the soup to make it into a sort of teochew porridge which felt and tasted very warm, homely & hearty. Of course it all went down well with the Shinriki - as the umami from the sake complemented this course which were all packed with soya & salty flavours.


4) Yamada Jyuro (the tallest bottle)
This is technically not a sake. More like, a sake-based plum liqueur. Izumibashi uses only their junmai (high grade, pure rice) sake as base and local Jyuro (Japanese plums/ume) for this. The mix is matured/pickled for about 2 years to maximise the umami of the plums and mellow out its sweetness. 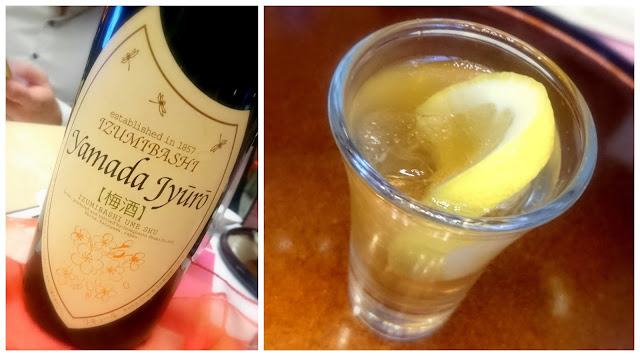 Does the design  of the label look familiar? That's because it follows the shape of a rice kernel!

On its own it's really, really sweet. I don't have a sweet tooth so it won't be something I would usually order. However, Kampachi served the "Ume Cooler" as our welcome drink (shot) which was made with Yamada Jyuro, lemon and ginger ale which was the perfect thirst quencher I found myself gulping down copiously.

The Yamada Juro was also served with dessert, ending the night on a sweet note.


All these sakes are only available at Kampachi, by the way.

Thanks for having me Kampachi! This was an unforgettable night.
Looking forward to the next event. :)