Oh my goodness. I'm still not used to the idea of 2015 yet and June is coming (tiny GoT reference, anyone?). What on earth? Does time go by faster with each year with age? Or is it because of those dratted technological advances that makes us forget to slow down and enjoy the time we have on earth?

I find myself spending too much being "connected". It is a terrible habit really, how the internet and technology has taken over our lives. At first I thought it was just a younger generation thing but no - the older folks (ie my parents) have now picked up the habit of constantly having their noses buried into their phones. For me, it's gotten so bad that now, I can't sleep if I don't spend at least an hour surfing on the net for pointless mindless entertainment to unwind. Sometimes I wonder if Wall-E wasn't a bit of a prophecy - human kind being too dependent on technology to the point we even forget how to WALK. Scary thought for me.

Which is why, since last year, I've been making resolutions to get disconnected more. I've taken myself out of chat groups, muted a lot of apps, and really trying very hard to be in the NOW. I have to admit, it takes a lot of effort to do this. More often than not, I find myself being drawn to the damn phone. I must make this habit stop. How bad is your tech habit? Do you even have one? 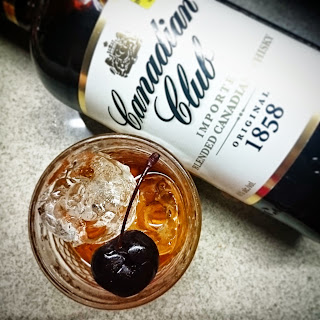 The Canadian Club Original 1858 is the closest rye whisky equivalent we can get in Malaysia. On its own with some ice and water it's a smooth, sweet drink, thanks to the rye. It's also stupid cheap in KLIA. In an old fashioned, I'll need to cut down on the sugar as the rye already imparts sweetness on its own. Rye whisky is also traditionally used in Sazarecs and Manhattans too. I learnt very recently (when I posted this picture up actually) that Canadian Club is featured heavily on Mad Men - shocking. Since back in those days, I'd assume that bourbons would be the bigger thing vs canadian whiskies, but what do I know about their history and culture. :P

That all said, in the picture above - the reason for that dark maraschino cherry (which you should NEVER see in an old fashioned) is because this silly fella (me) mixed the drink all ready to be served, only to realise that there were no oranges at home. So,  not wanting to leave it bare, I popped a cherry (haha) in it. While it does looks pretty in picture, it does nothing to add to the taste. The lack of one orange peel makes such a difference to a drink, man. I'll get me some oranges soon and make right what has been wronged. I will. 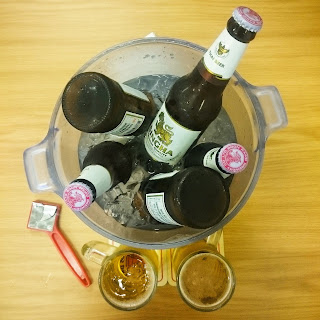 Truly my favourite beer in Thailand. So cheap and thirst quenching under the hot afternoon sun. I daresay it tastes better than some locally brewed beer even. I'm not sure if this is a promotional price, but dang it if a bucket of 5 Singha bottles for RM58 isn't cheap enough for you, I don't know what is (just don't go comparing it with how cheap you can get it in Thailand because I'm not in Thailand right now!). You can find it at this outlet: https://www.facebook.com/pages/SuRiSit-The-Thai-Kopitiam-Petaling-Jaya.

On the food, I'll reserve my comments. I was expecting the same menu like their original branch in TTDI, except when we were there, they had just changed their menu the day before. And unlike the usual dish offerings (the ones you eat with rice) the current menu is more street food, set rice, appetizer sort, but with very limited options. I wasn't too crazy about it but the Singha beer redeemed everything. 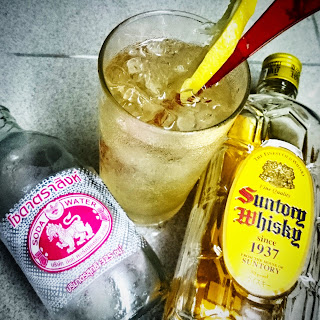 For years now I've been told how awesome the Singha Soda Water was. I'm thinking, but it's just water, with C02, how different can one brand be to another, right? Then again, so many people saying the same thing really piqued my curiosity.

So when I saw this bottle available at Surisit (mentioned just above) I had to grab one (not cheap -rm3.50 for one). The talk was true. It's cleaner, crispier, has more bite, and even bubblier than the local ones I've tried. I don't understand it. :/


4. Nikka Whisky in the Fridge. 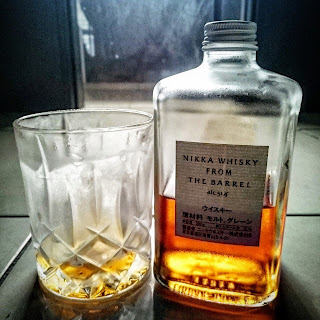 Sorry, it's not a new Nikka expression, lol. Just wanted to try how chilling the bottle in the fridge would affect the taste of my favourite Nikka.

It still smells and tastes sweet, with a syrupy mouthfeel, and the peat is more subdued. However, that spice and burn from the 51.4% ABV is still right there and have no plans of going away, haha.

Tried get buy a new bottle at Tong Woh with this one halfway done, only to observe that some kiasu fellas were already there to buy CARTONS of it. Just so you know, it is currently out of stock. Grrrr. 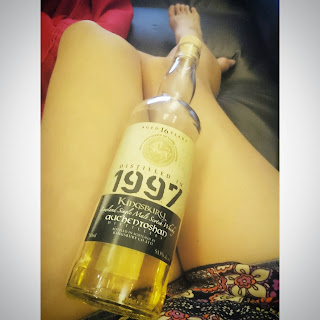 This Auchentoshan was 50 shades of YUM. My friend bought this bottle in Japan (apparently only place where Kingsbury is available) when he was there and boy did he get himself a good one. Smells like cookie caramel batter and tastes creamy with a syrupy feel but none of that grassiness I'd come to expect with a Lowland. That 53.5% didn't even bother me. So so so so good. Anddddddd it's all gone now. :( 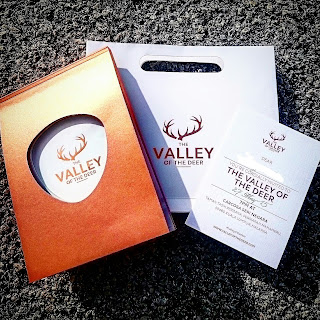 Wahey! I've gotten my invite to the whisky event of the year! I'm pimping this out nearly every week now aren't I? I've mentioned before that I will always have a soft spot for Glenfiddich because it's the first ever single malt whisky I've ever tried and fell in love with.

So I'll say it again, this week, these guys are replicating their distillery in KL and running tours with a whisky sampling session to boot. Tickets are still available for Friday and Saturday (Wed & Thurs tickets are all gone nowt!) and it comes with a bottle of your choice. Just click on the link to get it right now: http://www.eventbrite.sg/e/the-valley-of-the-deer-tickets 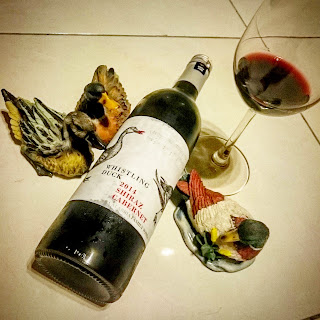 On with our quest to get kitschy sounding labels under RM50 - this one's called Whistling Duck, hehe, how cute! This Australian one went well with the lamb chop we had for dinner. On its own it was perfectly fine too. Correct me if I'm wrong, but the Ozzies sure like to mix their grapes don't they? Will buy again. Not sure where else you can get it, but we got it from here: http://www.wwwinewarehouse.com.my/


Insta Weekly is a weekly summary of boozy updates from my Instagram.com/fireangel80  account under the hastag #angeltini. Feel free to click on the link if you think you might enjoy daily updates on booze, food and other random stuff by a girl from Malaysia. Cheers!