So I "predicted" before that events would be slow during the fasting and Raya months ... and I've been right so far. :)

Not complaining  though - it gives me more time at night to practice making drinks and experimenting with stuff like below: 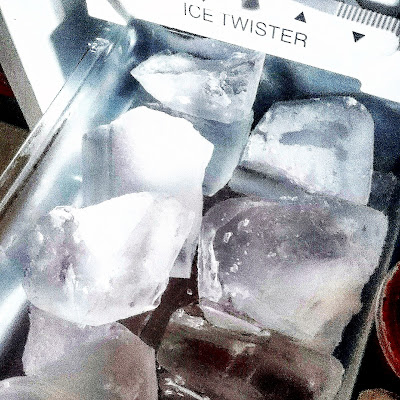 I keep wishing my ice didn't melt so fast, diluting my shaken cocktails too quickly while not chilling it fast enough. Large ice blocks would fix that. I've been pinning for those expensive silicon extra large ice cube molds available on Amazon for years. But it was very difficult for me to be enthusiastic about forking out RM20 bucks + RM40 insane delivery charges just for some rubber-substitute ice trays.


So this was my cheapskate solution:

Freeze boiled water in the see-through plastic containers that restaurateurs like to use when you takeaway your food with the lid on. I had to actually do it twice - starting with a half a layer first, letting it freeze, then adding a second layer. I do this so that the middle of the block freezes up properly. Once frozen, knock it out and cut them up to size.

Verdict: IT TOTALLY WORKS. sure it's ugly, BUT IT WORKS. The larger blocks of ice takes a REALLY LONG TIME to melt. SO HAPPY. Cost = FREE. #fixedit

You can even use this in place of those ice balls that everyone's clamouring to get their hands on. Ok what, it's rustic and made with your very own bare hands!

P/s: Also made happier to read reviews that the silicone trays also has a smell which transfers to the ice after awhile. So glad I didn't buy them in the end. :) 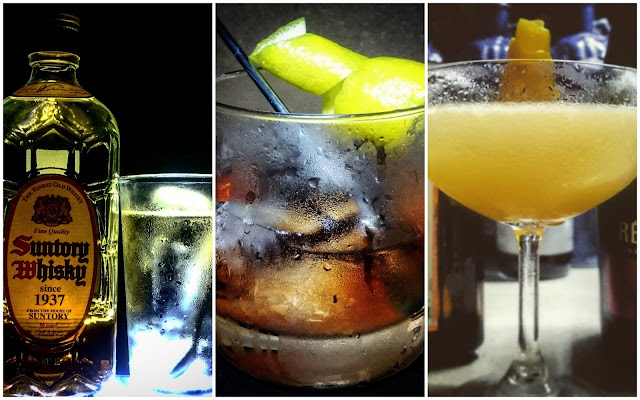 I keep making this but I've never been able to make a Mizuwari just like how it's describe in this Bartender anime, as if it's the most refreshing life-changing thing which soothes even the weariest of souls. To me, it just tastes like, cold, over-diluted whisky la. I enjoy it, but it's nothing like how the anime described it.


Using a chilled highball, I chuck in ice blocks, stir 1 shot of my whisky 12 times, add cold water, stir it another few times anticlockwise, lift the ice up so that the liquid mix and serve. So what am I not doing right? HELP!

Tried making the Sazerac cocktail using Rittenhouse rye whiskey and Peychaud's bitters - what a great combination! The rye whiskey is sweeter than your usual Bourbon so I didn't even need to put in much syrup. The aftertaste of absinthe wash is pleasant and unmistakable, with my mouth being coated with its milky sensation. I think I'm really learning to enjoy this with lighter bourbons and rye.

Revisited another classic, the Sidecar. I forgot how strong it was until I read the recipe: 2 cognac :1 triple sec :1 lemon juice + squeeze of lemon peel. 2 shots of brandy man, it doesn't taste maddeningly strong because of the cointreau and fresh lemon juice... until it's too late and you feel woozy afterwards.

All drinks last week were made with my cheapskate ice cubes - it worked a treat! 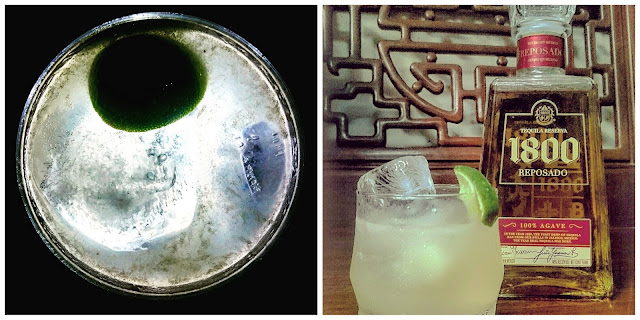 19 July was Daiquiri Day and 24 July was Tequila day (which I celebrated belatedly with a margarita). If you were wondering what the origins are and how it came about - it's just marketing and an excuse for imbibers all over the world to stand united to imbibe and hashtag the crap out of each other. :)

This time, my Daiquiri was made with 2.5 shots of Havana Club rum (though evidently, the original version uses Bacardi Superior, but I ran out of it), 1 shot fresh lime (very important that it is fresh, not cordial, 2-3 limes should do it), 1/2 shot syrup (2 sugar : 1 water). Since it's much stronger than usual, I serve it with ice cubes so that I can take my time to enjoy it.... Coz Daiquiri's typically served in a cocktail glass straight up, by the way.

So I've mentioned before that the diabetes-inducing, fruity, colourful slushy daiquiris you get at the tex mex are basically a bastardisation of the original thing - which is already quite perfect to begin with.

Perfectly balanced and refreshing, completely unassumingly strong. Yes it's supposed to be strong - how can it not be, since it's Hemingway's favouritest cocktail ever?

You know, I still haven't got my Margarita right. It should be one of the easiest thing to learn since it's essentially just tequila, lime juice and syrup. But sadly I still can't seem to get it as delicious as the tex mex restaurants do it (think la carrethas, la frontera).

The ones I have outside are always smooth, the agave isn't vulgarly overpowering... but sometimes it does get a little sweet. Maybe it's the 1800 tequila I'm using. It does tend to have a sharper agave taste and a rougher bite on the tongue (the blanco even more - I'm already using a reposado this time). I'll try it again with other tequilas next time and see.

Both drinks I made using my cheapskate ice cubes - LIKE A CHARM IT WORKS. SO HAPPY. OH MY GOD. 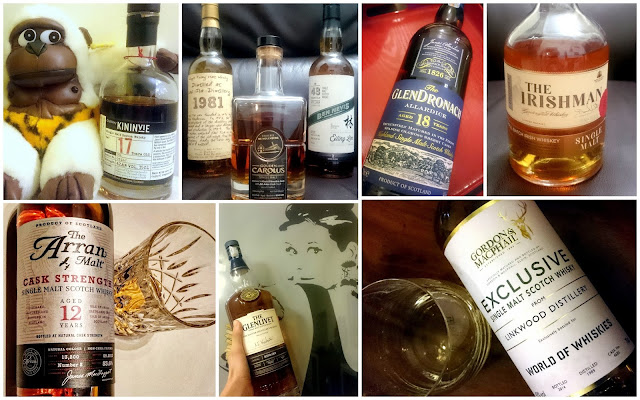 The Kininvie 17 was my least favourite of all. It was spicy, grassy and a little alcohol-ly (it's not even a word, I know, sorry) for my delicate palate. But others who tried it, like it - so it's probably just me.

Gouden Carolus Single Malt is actually made with the mash of the Gouden Carolus Tripel beer from the Brouwerij Het Anker brewery in Mechelen, by Belgium's 1st whisky distillery, Stokerij De Molenberg. All of which I know nothing about and had just learned about using Google at time of writing. :p It had a scent that reminded me of a cross between a flowery perfume and soap. Tasted young, but for a 3 year old, it's something different to surprise your palate with.

GlenDronach Allardice Bottling Note - saved that for the last, because I was a little intimidated purely by its colour alone, which reminded me of soya sauce or sesame oil. At once, you'd know it's from the sherry cask and it easily had the best scent. Tasted heavy, tasty, with a long, dry finish you sherry heads absolutely love.

The Irishman is typically Irish. Smells very good, fruity, upfront, very light in the mouth, with no finish.

I reached out for the Gordon & Macphail most - it was such an easy, breezy, light, tasty everyday-drnking dram. You won't feel "jelak" (bored) even after umpteen drams.

The Master Distillers Reserve - Small Batch is quintessentially Glenlivet. The smell kinda reminds me of its 15... fruity, quite easy to drink with some spice in its short finish. Each batch carries a unique number and released throughout the year. This makes part of the  "Master Distiller's" NAS range which is set to replace the 12,15, & 18 in travel retail. I missed the Guardian's launch event for this, sniff, so didn't get to try these other 2:

On a separate occasion, I had the The Arran Malt Cask Strength 12 years at home. I've forgotten how yummy it was. I'm going to put my neck out there and declare that this, THIS is my favourite 12 year old to-date! Maybe the 53.6% ABV had a part to play in it, giving it the additional OOMPH, that syrupy mouthfeel that most 12s lack because of how young it is. Just when you think you're done, the heat from the spiciness comes in - SURPRISE! I highly, highly recommend this, and I believe it's (still) not too expensive at all!

Well then, as usual - until next week, be safe!