Another happening week last week. So much so that I'm already getting a back log of event posts which I haven't  publish... oops! So without further ado:

1. The Best Cosmopolitan I've Ever Made 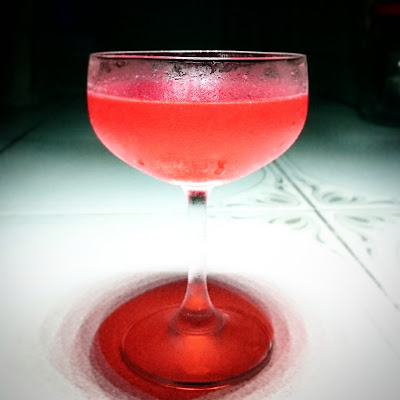 SATC made the Cosmo super popular way back when. It's actually not too difficult to make. All you need is some vodka, cranberry, cointreau and lime juice and an orange peel for its citrus scent. I prefer to put in a touch of sugar syrup for some viscosity. Also, if you don't have an orange peel around, 1-2 dashes of orange bitters work fine too.


Decided to make this on a whim when I had too many frozen cranberries in my freezer (which I use for my overnight oats).... and realised HOW RED THE DRINK BECOMES. Absolutely LOVE the colour on this. The picture doesn't really capture it properly but it's VERY BRIGHT RED. Plus it tastes like no other cosmo I've had before. Now I don't think I can have cosmopolitan in any other way, haha.

Also did you know that cranberry juice is popularly used to prevent UTI? So have more cranberries in the form of a cosmo! :P 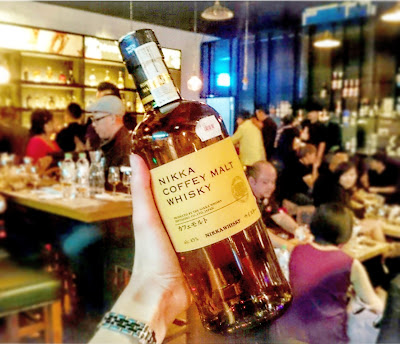 Nikka Coffey Grain has been around in Malaysia for a couple of years now. But it wasn't until the Malt version was brought in did Tong Woh officially launched the series last week. More about the series soon when I will dedicate a post to it. But very quickly first:

1. Coffey has no coffee in it. Coffey is the name of the still that the whiskey is distilled in. I've lost count of how many times I've overhead people saying that it's made from coffee. STAHP!


2. My first acquaintance with the Coffey Grain was from a few years ago. The Coffey Grain then and the Coffey Grain now will taste quite different thanks to the insane shortage of whiskies that Japan is facing right now, but still much better than other grains I've tried :)


3. Asahi Is Made In Malaysia #truestory 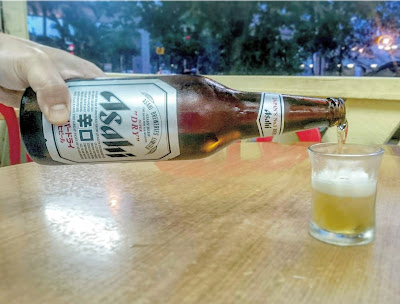 Launched in Malaysia in 2011, Carlsberg Malaysia owns the rights to distribute AND brew Asahi in Malaysia.

The taste may differ from the original imported one from Japan but the Malaysian version still retains its dry, crisp Karakuchi character that Asahi is known for. Also, It's difficult not to enjoy this with food because it's actually really easy to drink when it's cold.

The pros of having it brewed in Malaysia? Cheaper and more attainable for you and me not just in upmarket grocery stores and trendy bars & clubs but also in kopitiams! Yeay! 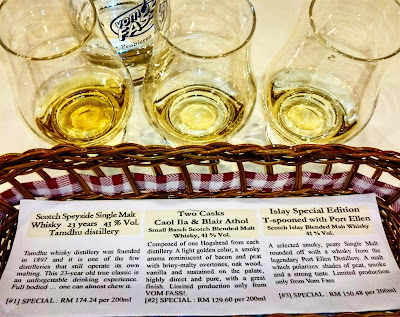 Tamdhu 23 years old (43%) : Easily my favourite because I'm super pro Speyside in general. Delicious in the nose, thick in the mouth. Yum.

Coal Ila + Blair Athol Blended (41%) : Even though and islay, I could still palate it, surprisingly. Not too peaty for me.

Islay Blend T-spooned with Port Ellen( 41%): This one's interesting. Smoky too but also still palatable. Think it's more smoky than the second one above. Tea-spooning is basically when a small amount of whisky from a distillery is added into a cask from a different distillery to make a blended malt - usually done to prevent cask purhcasers (like independent bottlers) to sell the original cask under the original distiller's name.

This happens every month. Get updated about it here: https://www.facebook.com/vomfassmy 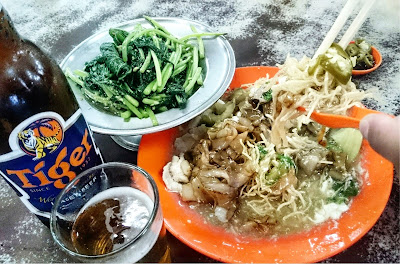 Was actually invited to go for a media weekend makan/minum road trip to Penang and back which I couldn't attend. But if you're on instagram, you can follow the few lucky buggers who DID go on this makan adventure via the hashtag. Following their trail made me green and jelly. :/

I'm guessing the whole point of this is to remind you how Tiger goes well with street/local food. Well, needless to say I know that already. :) 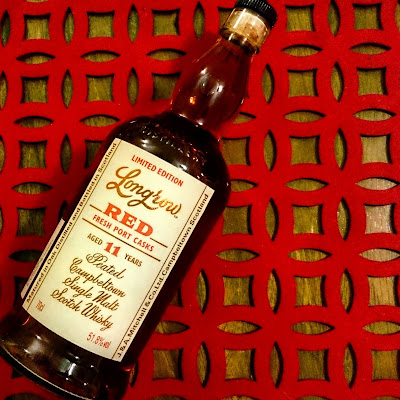 First tasted it back in May when a friend brought his own bottle for everyone to taste (rather, finish).

Well at 51.8% ABV, it's still a BIG kick in my teeth. It's got a sweet wine on the nose with some peat. Tannin in the end. And lots of smoke & peat in the mouth. I'm sure you've love this if you're a Campbeltown / peathead. As for me, my palate's still not mature enough to play with the peat boys. :( 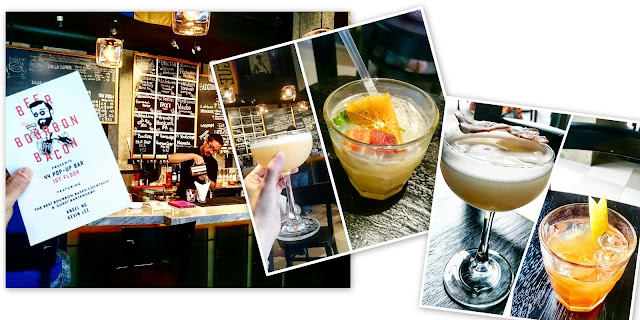 So this BBB event by 44 Bar & Taps happened last Sunday! The place was swarming with people by the time I left.  It was a interesting event concept and I had some great times shared among good friends which made it even better. Post report to come sooner or later but in summary, craft whiskies were tasted, craft beers were imbibed and special cocktails were chugged. so... WHERE WERE YOU? WHY DIDN'T YOU SHOW UP?

If you follow me on Instagram, a BIG THANK YOU for contributing to my FIRST K! Hopefully the first of many to come! 1k may not be a big deal for some but it IS to me! I've never in my entire social media life have had so many followers. Not even when I personally blogged back in 2004, not even on my own personal Facebook account. Heck, I don't even think I KNOW so many people in real life!

I strive to take better pictures and share more exciting stories. Instagram is still my favourite social media channel because it allows me to say what I wanna very quickly and spice it up with a picture which I can edit to high hell as quickly! Any tips and words of advise this noobie?