So as soon the the raya festivities ended, the parties came back. I don't suppose a long introduction is needed because last week was quite a happening week, so prepare yourself for a long update ahead: 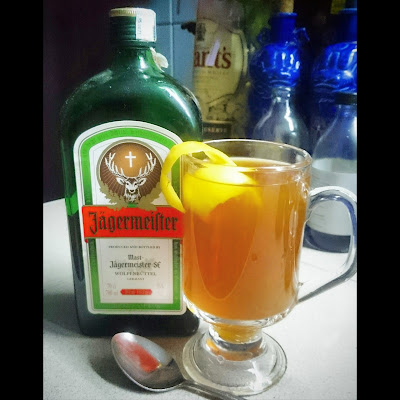 Caught a nasty flu over the week - sorethroat, flu, slight temperature.. and a little after, the cough came.

Then I remembered reading how Jagermeister was once upon a time marketed as a herbal relief for cough and aiding digestion. Made with 56 herbs and spices, I guess something in there is bound to be good for you (or cause an allergic reaction). I'm actually inclined to buy the cough suppressant part of the story because there was once I attended a Jagermeister Halloween party with a bad cough, but wasn't coughing at all throughout the entire party because I had imbibed quite a bit of Jager (and I had it chilled, too).

So this is Jager, brandy, lemon juice, honey and hot water toddy. I didn't cough at all while I was having the drink. But it came back after I was done with it. :( 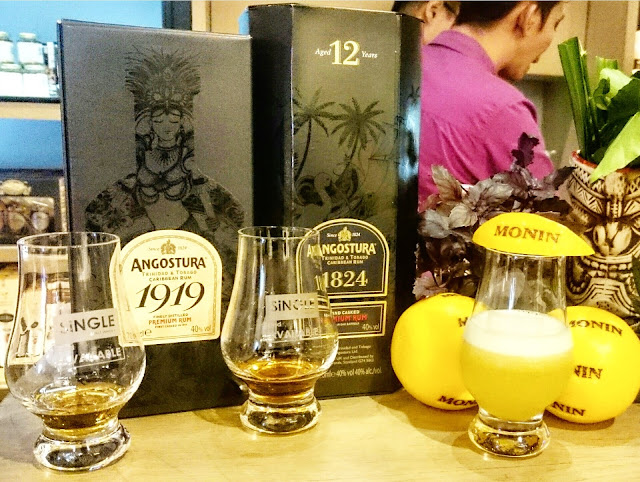 Last week, Single & Available featured rums for a change from their usual monthly whisky flings. This time, Angostura rums were featured. Angostura is a Caribbean rum which hails from the very same company that produces the famous Angostura bitters. 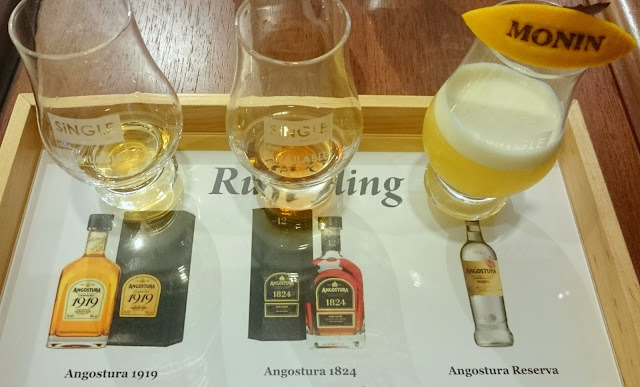 Angostura 1919 had a delicious vanilla scent and a little rough on the side. The Angostura 1824, which is aged 12 years is smoother but the scent of oak kicks you in the face. You could sip it on the rocks like you would whisky. The Angostura Reserva was mixed in a cocktail made with Monin Grapefruit mix, lime and pineapple juice which was fruity & easy drinking but unfortunately clever me didn't try the Reserva (it's a light rum) straight up because I was too busy having another cocktail and 1919 :( 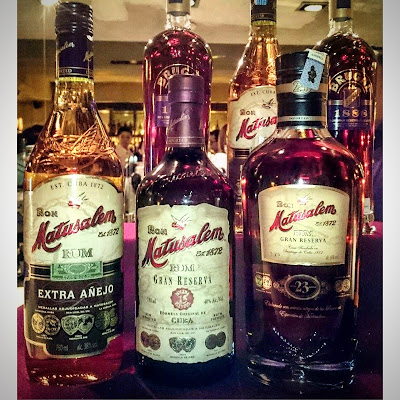 Last week seemed like a lucky rum week for me. After the Rum Fling, I got an invite for this event which featured Matusalem rums. This is exciting for me because my first taste of the Matusalem Platino (light rum - back then I only had the Bacardi to compare!) was so memorable that I fell in love with the brand.

Matusalem is originally a Cuban brand, which fled Cuba and established itself in the US (because of the infamous embargo) and is now residing in the Dominican Republic. It'll be exciting to see what happens next once the embargo has been lifted. :)

The extra anejo was used for the mojitos we had that night - which I feel, didn't do the rum justice. I'm going to try to get a bottle and see if I can make a better one, haha. Some of us were lucky enough to also have a taste of the Gran reserva 15 neat and it tasted deliciously like a cross between a cognac and aged whisky... If only we could have more.

Went over to 44 Bar just before the KL City Grand Prix weekend to past the time because if you work in KL you know that you can't go home until late with the mad jam due to the road closures.

Had a taste of their other bottle aged cocktails which were YUM. Seriously if you go there and you don't check those out you're totally missing out - ESPECIALLY if you're one of those people who only think that cocktails are fluff, wimpy and always too sweet - BECAUSE THESE ARE NOT. They are great reminders of how cocktails can be really strong, manly and why the classics stand the test of time. Also had a sneak peak of the American whiskey options that may be featured in the upcoming BBB (Beer, Bourbon, Bacon) event which I'm taking the opportunity to pimp about now:

So Taps Beer Bar and 44 Bar have collaborated to bring us this event which features (SURPRISE!) - craft beers, craft whiskies AND bacon-inspired dishes which will be held at Taps' Mont Kiara branch.

Both places are selling RM88 tickets on location which entitles you to:
We're promised to be entertained by a live band and plus, there will be 2 guest bartenders, Angel and Kelvin, whose special cocktail offerings (expect porky, american whisky and beer inspired mixes) will be available for sale at a discounted (correct at time of publication) prices. You can buy the tickets in advance or on event day. If you wish NOT to buy a ticket but wanna show up anyway to try the available ala care stuff (WHY WOULD YOU DO THAT?) you could - but all the discounts will not be applied to you. :)

This BBB is a smaller scale of the famous American event of the same name which is like a GIANT FAIR with crazy more beers (more than 50 labels!) and bourbon selections (which are American whiskies made of > 50% corn. the Malaysia version however, will feature various craft American whiskies by Liberty Spirits Asia instead) and with loads of food stalls. 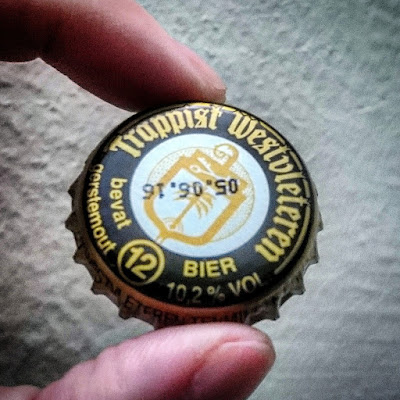 Held on the first Friday of August - of course this is just another marketing gimmick for you to consume more beer which I'm not complaining about.

I take this opportunity however, to share with you about this gem of a beer - Trappist Westvleteren 12. I've not tried a lot of beers in my life, but I will nevertheless declare this - this is the most perfect beer I've ever tasted to date. Not too thick, not too gassy, not too anything. It was just right. It's like the monks found a way to make it one with everything (get it get it?).

Unfortunately, it's tough as hell to get. You literally need to SHOW UP at the abbey to get it. Yes Trappist is made by monks. In the abbey. Who only brew just enough beer to maintain their way of life. There are crazy limitations to getting this eg: each CAR is only allowed TWO cases and you HAVE to book 2 months in advance. These monks refuse to make ANY MORE. This is of course, highly infuriating, but I guess I have to respect how strong-willed and principled these guys are. Also, being able to control the quantity and not pressured by demand allows them to ensure that everything that goes out is quality controlled, I suppose. But I'm still quite sore about it not being easily available, hmph. 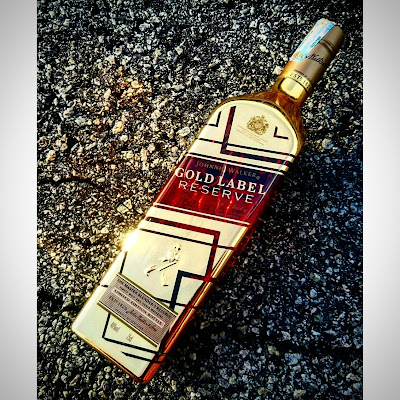 Inspired by the recent Diageo World Class competitions that's been going on locally and internationally, I had a hankering to create a cocktail using the Johnnie Walker Gold. Bartenders were also made to use this to create a cocktail in the 1st round of the Malaysia Worldclass league. Well, the generous folks from MHD Malaysia heard my wishes and presented me with a beautiful, super ong, bottle of the Bullion 2. It's only available on selected duty free AND the bottle with this 2015 design is limited edition. Needless to say, my new problem is now not being able to bring myself to use this bottle. HELP. #hoarderproblems


7. Celebrating #sg50 with a Singapore Sling 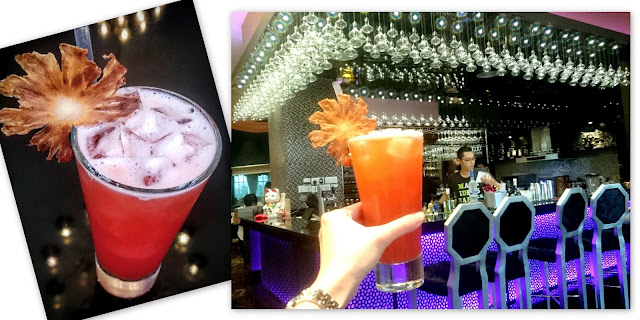 So our neighbors celebrated their 50 year divorce with Malaysia with a 4 day long weekend. Singaporeans have reminded me before about how sad the late LKW was when he and Singapore were forced off Malaysia but really guys - aren't you all having the last laugh now? *bitter smile*

Well, in the spirit of comradeship, I had a Singapore Sling at Hexa Lounge which happens to be the closest cocktail bar around my location. Prior to the weekend I shared my wanting to make a Singapore Sling (didn't happen as I couldn't get hold of cherry brandy) for #sg50 but ironically, friends from Singapore asked me why on earth would I want to drink something that even Singaporeans don't want to drink.

Unfortunately for this historic Singaporean drink - it's turned into a bit of a joke and tourist trap. Concocted in the Raffles Hotel bar around 1911, it's got a really nice long history behind it (read it here) but today, it's nothing more than some overly sweet overpriced drink to attract tourists to the Long Bar (or so I've heard and read. I've never personally been there myself). Personally, I don't believe in a bad drink - especially a drink which has been around for so long. All it needs is a tweak in a recipe, and a bartender who gives a crap about making a good cocktail. Needless to say, the Singapore Sling with the baked pineapple slice and 2 shots of gin I had at Hexa Lounge was fruity, well-balanced and delicious.