(Warning, this is a picture heavy post. With loads of horribly taken pictures.)

Kirin ran a promotion through the month of September whereby with any purchase of their beer, you get a chance to participate in something called "Glamping" on 3 October.


If you're not too familiar with what Glamping means, it's actually a marriage of 2 words - glamorous and camping. So it's a form of camping where you spend some time away from the comforts of your own home in a sort of a retreat (mostly in the forest or nature reserve, like camping lah), but you don't forgo any luxuries like electricity, plumbing, the internet. etc (hence, glamorous).


What that in mind, I actually was expecting an overnight experience and was looking forward to it. But Kirin clarified that it was just going to be an event lasting a few hours with fun "camping" activities and food - ie, more like a party without any of the hassle of needing to stay the night. Fine by me! A party by any name, is still a party! But I was intrigued... what in the world will they be doing to make it seem like one is on a Glamping trip?

Firstly before we even talk about the event proper - the invite was couriered over. COURIERED. Check out the pearly thick paper that was used for the invite! How much thought was put into that man? LOADS!


Before we entered into the event hall, we were given a bunch of paints and brushes to decorate our own Japanese lanterns, which was hung at the entrance of the event hall.


After the first task was done, you were lead to the event hall by hot Kirin chicks.


And you'll instantly feel like you've been transported into an ACTUAL camping ground.Why? There was grass. Lots and lots of grass! The entire event hall was filled with fake grass! Even the lighting is dimmed to make you feel like you're being in the dark outdoors.... but you're actually indoors! What sorcery!


Not forgetting nice little cute white tents all over the place and activity booths! Those were so cozy you could just lay down and zzzz.....


The place was filled with hot Kirin chicks in really short Kimonos who keep plying you with ice cold Kirin beer. If you were a guy, this is one version of heaven on earth.


There were also fierce looking Kabuki dancers lurking around too, hoping to be asked for a selfie. Yes they may look frightening on the outside, but inside, they are just insecure little demons who love taking selfies, just like we do.


We were given the chance to play with something called Kendama which looked like a simple silly wooden child's toy - NOT. Getting that darn wooden ball to balance on the wooden stick is almost as hard as algebra. Okay, maybe not as hard as algebra, but it was HARD.


We even got to made our own campfire chairs out of cardboard! This has got to be the most original thing I've ever seen in awhile (I haven't been out much, I guess)! I thought it was so awesome I wanted to bring back the whole lot! And it was sturdy as anything man! Even a baby elephant could stand on that thing! Just look at how excited I still am with every sentence in this paragraph being punctuated with an exclamation point!


We get to silk-screen our own recyclable bags to take home. Seriously just can't get enough of awesome free stuff. 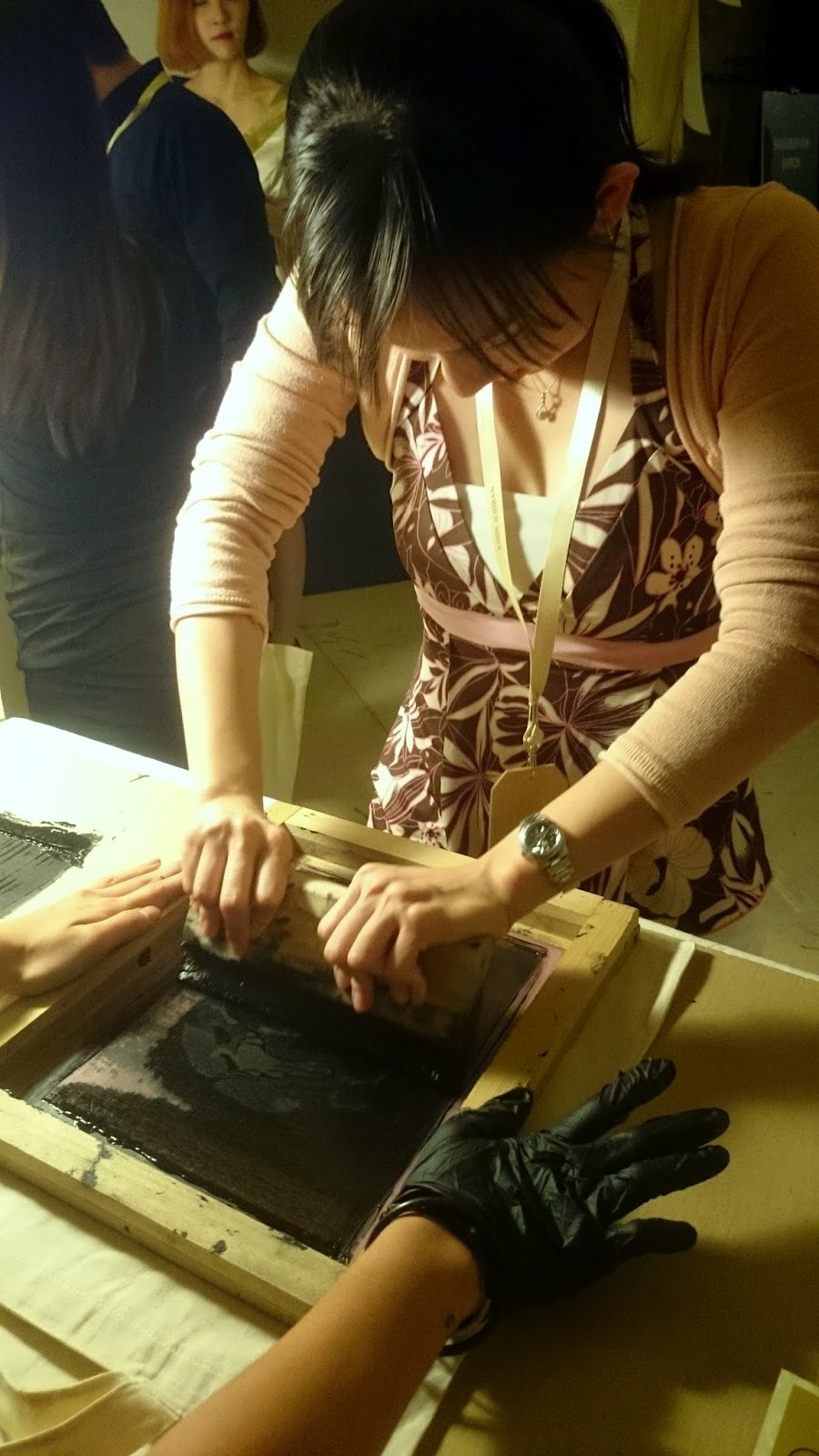 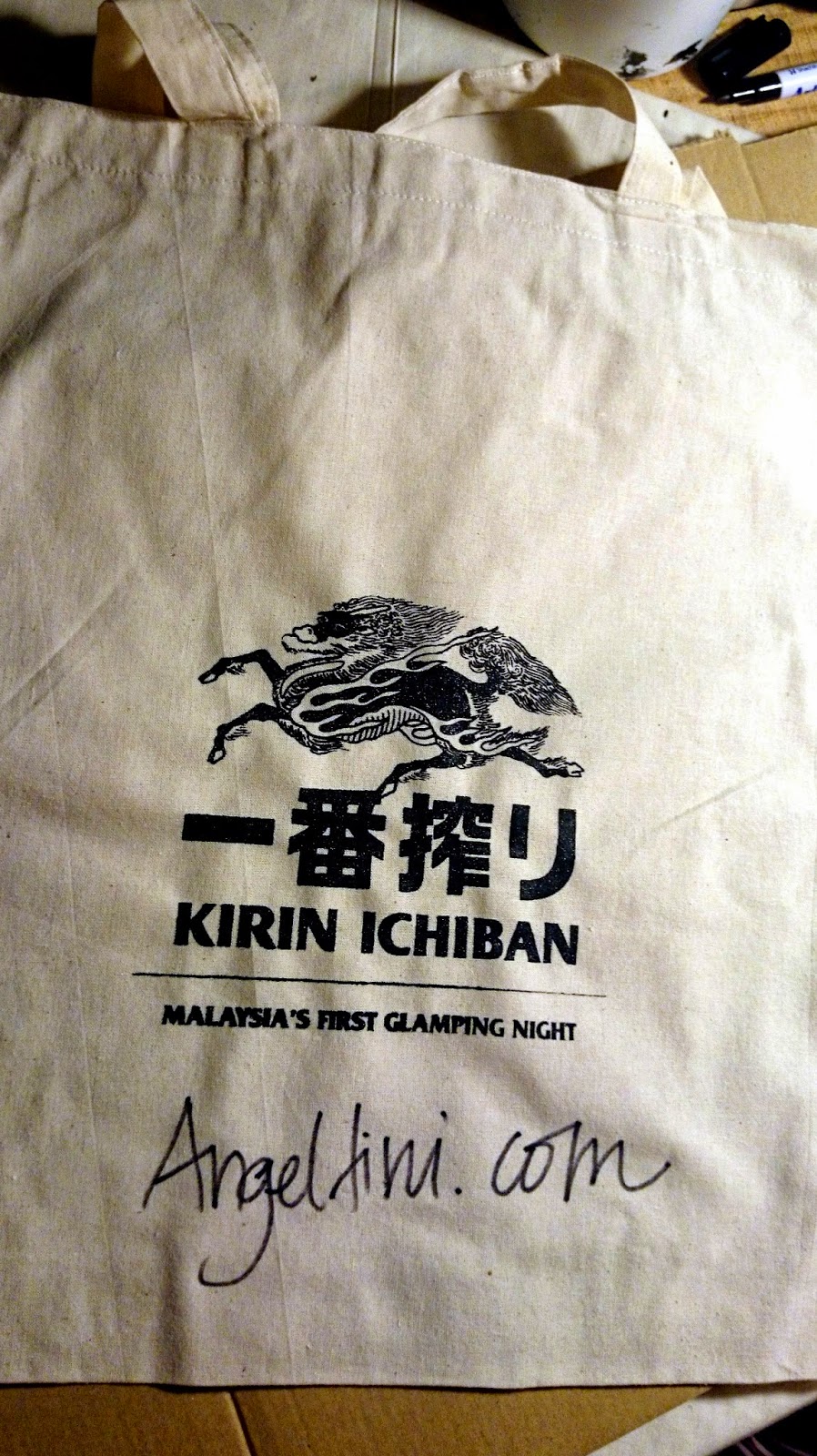 Then, we get to create our own bento box meal. Kirin made sure we had plenty of food because there were also servers walking around the camping site with what seemed like a never-ending flow of sushi. An event that makes sure you're always fed and quenched is an event that is deserving of a lot of love. <3


After we've completed all our activities (lantern paining, silk screening, making our own bento) we get to collect a 4-pack Kirin beer to tarpau home! Kirin, you're seriously too much!

And what's a fake glamour-camping, without some huge arse fake bonfire?

I can't even begin to describe how starstruck I was when I realised that Deborah Henry was the host of the event. She has got to be one of the hottest Miss Malaysia I've ever met, and crazily intelligent. Not to mention terribly lovely too. Swoon.


We were entertained by a live DJ set, live band and a (quite odd) dancing number by the Kabuki dancers (which, in all honesty, wasn't at all an actual Kabuki dance, more like.. spasmic breakdancing. But it was still quite entertaining nevertheless). Which was all great when you have had copious amounts of Kirin beer served by hot Kirin chicks. In short, short kimonos. No, I can't really get over how short the kimonos were.


There was a surprise giveaway that night - ONE chosen winner (drawn randomly from a form we had to submit at the beginning of the event) gets to go to an all-expense paid trip to Japan for 5 days for 2 pax. I was gutted that it wasn't me. So gutted that I didn't even want to take pictures of the winner. So HMPH.


It's not too late though. Because from now till mid-November 2014, if you buy any Kirin, make sure you get a scratch card with it because you'll stand a chance to win a trip to Japan. For more on that check out kirinichiban.com.my/japantrip

Now what is the point of this post anyway? It's so you know that you've missed out on one helluva awesome party. Then next time, when Kirin says that they wanna give you some awesome free stuff, you'll BELIEVE IT.

Thanks for the awesome party Kirin! Please invite me for the next one. Better yet, why don't you just send me straight to Japan? Domo arigatou!