Did you know that Luen Heng Sdn Bhd. (a subsidiary of Carlsberg) was the champion that had the foresight to bring in Hoegaarden into this market eons ago when it was literally unheard of in this market? While it has now become a very popular, hip, drink to be seen with these past few years,  it is THE BEER that made me change my mind about beers almost 10 years ago. So that's my way of saying, I liked it before it was even cool to like it (/kiasu).... and also indirectly admitting that I'm kinda.... old. :(

So, these guys at Carlsberg and Luen Heng have been very busy bees. Over the past couple of years, they've been bringing in other really awesome imported beers like Kronenbourg 1664, Kronenbourg Blanc, Asahi, Little Ceatures, among others, and just last week, Grimbergen ..... on TAP. YEAY!

The Grimbergen Blond (pale ale) was actually launched in Malaysia last year, but the Ambree (brown) and Blanche (wheat)  are new in the market (correct me if I'm wrong). I know many people who are completely head over heels over the Blonde... but she's not my cup of tea. That's because I generally don't enjoy pale ale to begin with. But if you're nuts about the Kronenbourg Blanc, Blonde would be right up your alley because they are both VERY fruity tasting beers. It's almost like a Hoegaarden because they are all sweet but Hoegaarden's sweetness is not as overpowering (subtle, like honey) and  it has that additional citrusy tang which I like.

Blanche is smooth, mellow, with a strong but subtle character (just like how I like my men, hahahah)...and it is my favourite of the 3. So if you usually enjoy the  Paulaner Weissbier or the Erdinger Weissbrau (both are German), chances are, you'll enjoy this too. 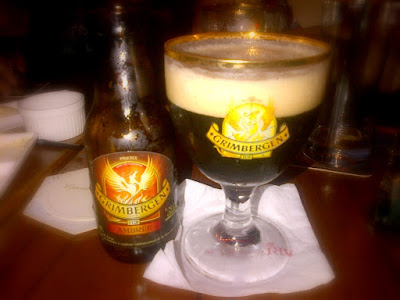 Grimbergen Ambree: Once you go dark.....

But wait, Grimbergen also has a range for those who enjoy dark, malty beer (think dunkel, not Stout). It's crispy, drier and  more bitter than the other 2 - more masculine, I reckon. So there's something for everyone! In fact, it has 9 varieties of beer under the brand, but we're getting only these 3.... for now (nudge nudge).

The (good) problem with Grimbergen is that even with such high (6-6.7%) alcohol content, it goes down VERY easy. The other (bad) problem is that it's not the cheapest. It's currently sold at RM20 for a bottle and RM28 for a draft pint. But there will be times when you get sick of the other common, cheaper local largers and stouts. And when you do, you know there's always the delicious, imported ones like the Grimbergen, patiently waiting, whispering sexily into your ear - seducing you to pick her up. And eventually, you will break and give in to her wiles. Just to finally get that taste of her in your mouth. Because it's fucking worth it.