Don't need to say how I felt about the shitty cheap wines because I believe it's a universal understanding that they truly SUCK, but I can tell you back then I had no love for beer in any form. It won't be an exaggeration to even say I hated it. My virgin tongue couldn't stomach the bitter after-taste at all. I especially hated Victoria Bitter because it was especially ... bitter.

However, fast forward (more or less)10 years to today, you can safely say that I now drink pretty much anything - beer, wine, spirits. But I'm using the words "pretty much" very, very loosely (give a girl her artistic license can ah? :p )


And then just last year, a few of us (shaolintiger, eyeris) had the pleasure of being invited to check out Ice Cold Bier @ Cheras. Among the collection of imported beers which we had the honour of trying (we'll get into that in a separate post) - was my none other than my old bitter friend, Victoria Bitter.

Man oh man. It has been nearly 10 years since I have had VB. How I felt about it, is very accurately illustrated by the following Futurama Fry Meme: 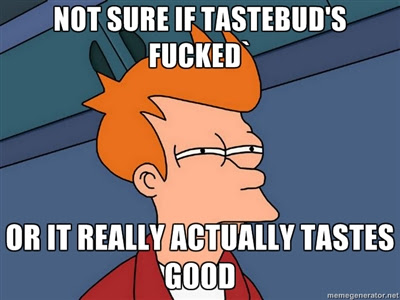 It actually didn't taste as bitter as I had remembered. Easy to drink, not too "bubbly", quite smooth. No awful lingering, after-taste. And especially when it was chilled extra cold, like all booze.

It tasted so good that we actually asked for another.

I think we finished their limited VB stock for the night.

Still can't believe that I like it now, after all those years of staying away from it like my life depended on it. It was almost enlightening. I'm pretty sure I made a sweeping statement back then about how I would never ever EVER like beer and how VB was the most vile tasting shit which I will NEVER EVER taste again. Admitting that I like it now felt like getting back with an old ex you swore you will never want to have anything to do with ever.

I'm just going to go with my tastebuds being really, really fucked. Afterall, we had those VBs after we had tasted nearly a dozen other beers.

But just to be sure, I'm going go buy myself a bottle to try it again. And this time, without trying 12 other beers just before it. :)