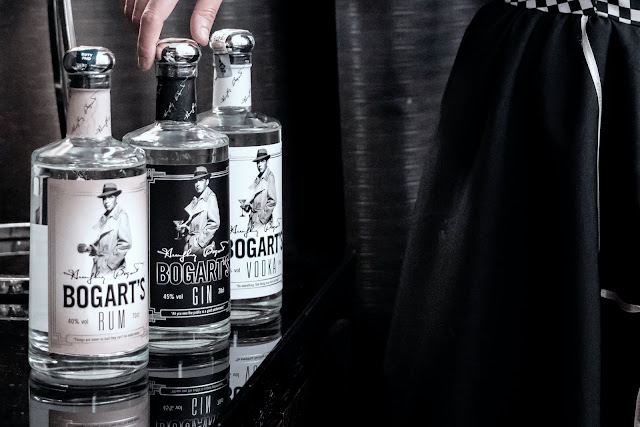 That's Humphrey Bogart’s famous quote from the movie Casablanca. Before Marlon Brando and later James Dean perfected the art of mumbling while looking suave and sophisticated, it was Bogart that started it all.

The Bogart Spirits is a collection of 4 spirits - rum, gin, whiskey, vodka, by ROK Drinks Company (US) in collaboration with The Humphrey Bogart Estate.

The introduction of its gin, vodka and rum was held at the Majestic Hotel’s Cigar Lounge, a masculine, classy location truly appropriate for someone like Rick Blaine (Bogart’s character).

The gin is juniper forward with floral and fruity notes of lavender, citrus, macadamia cucumber and coriander.  The rum delivers flavours of  almond nuttiness and coconut. The vodka,
distilled 7 times, is clean and dry, with a light fruity body and spicy finish. I wished we could've tried the blended Irish whiskey which sounded like an interesting blend of single malt and grain whiskeys, matured for at least 3 years in ex-bourbon American oak casks.

To commemorate the launch, Johnny, the head bartender of The Majestic made 5 Hollywood cocktails - Ginger Rogers (gin based), Mae West (brandy based), Jean Harlow (rum & vermouth), Coco Chanel (vodka based) and The James Bond (aka Vesper) (a twist of the gin martini). With the exception of the ‘Vesper’ which is actually a classic cocktail, the other 4 named after actual famous icons of the past.


This collection is exclusively available  at The Majestic's The Smoke House and goes for RM45 a glass and RM600 for a bottle.